It’s Swarm in the Garden

23rd June 2010 5:20 pm Leave a Comment
These are the ones that got away!
One minute they were there and the very next… they were gone! 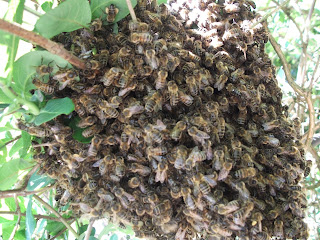 It was a hot, very hot Saturday in May. Thankfully The Pumpkin Patch workshop was just about to end… we’d just watered the greenhouse plants… very nearby and then the sky turned black and very noisy!!
Lucky for us, they quickly settled on to low bush of honeysuckle (ha ha!!)… the perfect place for us to catch them!! We phoned a friend for a spare hive to put them into and waited… took loads of photos and enjoyed the apparent calm of the swarming bees! 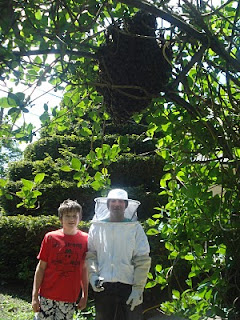 How silly we were! Why didn’t I get a box, knock the branch and drop our bees into the box and close it up until the hive arrived????? I just took photos!!!! The bees in the meantime got ample time to gather their thoughts, calm down, do a headcount before leaving for pastures new!
Our friends arrived, took one look, gasped in amazement and watched as the whole swarm of bees broke up and once again turned the sky black and took off like a long black cloud. They were gone! 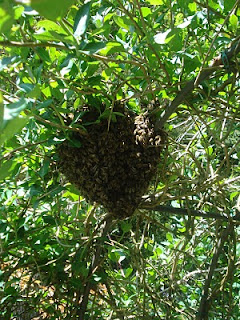 A sad day! An expensive day!
Thankfully we have been left with a good and strong hive, the queen has since been replaced by another younger model and we now know the cost of taking photos rather that taking action!
We now have four hives from the two we had last year. We had already successfully divided both hives during early May. One of the newly divided colonies soon ran out of space got a little congested and warm in a confined space and decided to take action… and move out.
The queen ensured that she laid plenty of good quality queen cells to replace her and off she went! I wonder where she is now?
where we are
cooking courses for everyone
improve your skills, your repetoire and have some fun with food at Y Sied