If there was ever a good reason to get up early on a cool, late summer morning, it’s to walk the dewy fields in search of wild field mushrooms.

At the beginning of August, when the morning sun warmed the air and made alfresco breakfasts a frequent luxury, getting up to make a mug of coffee, and take a stroll around the garden was a joy.  Now, despite the sun still shining through the window, it’s a cool sun, and getting out of bed is not quite as easy!  By mid morning, however, things have improved; the morning mist has lifted, and there continues to be just a little warmth to ease the weeding shift.

It’s years since I last saw a decent crop of field mushrooms so I was thrilled to answer the phone this week, to be told by our friendly neighbour that he’d spotted a load of mushrooms in one of his fields.  Strangely enough, they weren’t doted around all the fields – just here and there, along very definite routes and circles.  The little white buttons appeared overnight, and revealed themselves amidst the long green grass.  Some managed to hide until they were a good 15cm across, open and past their prime; they were best left. 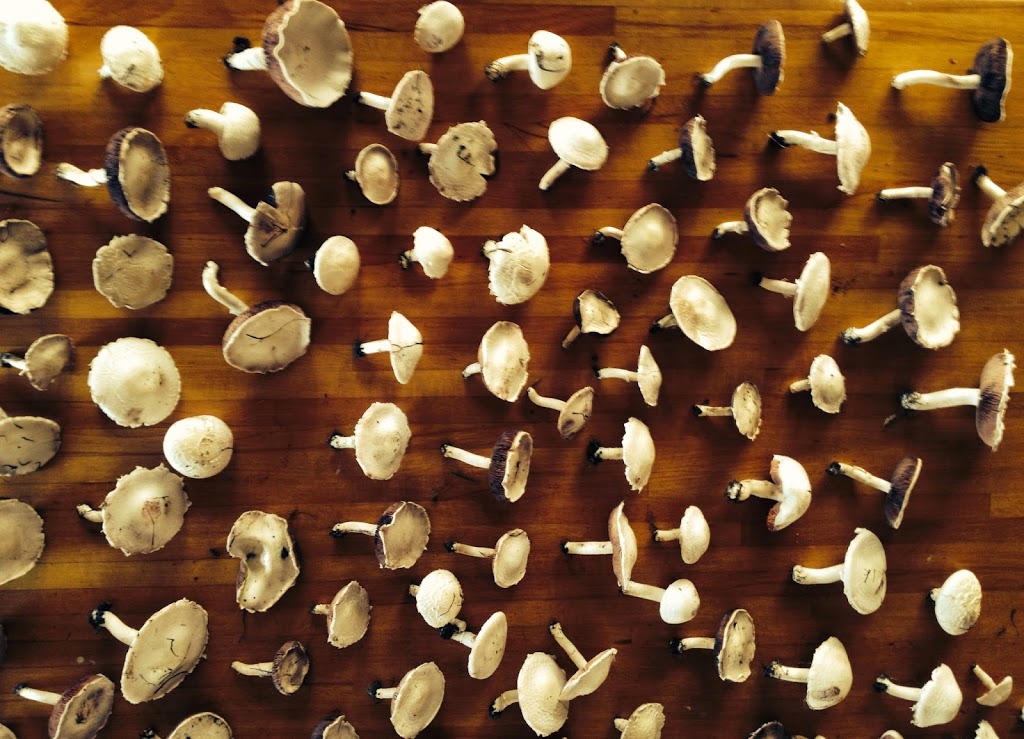 Walking through the crisp morning air, sun shining, across the dewy field, in wellies with bucket in hand, looking for the little beauties was fun and exciting.  I couldn’t resist the odd photo, to prove their existence despite the bucket full of evidence in my hand!  Thoughts of bacon sizzling, a freshly cracked egg and mushrooms, went through my head.  Beef and mushroom stew cooked with Guinness, creamy garlic mushrooms on a thick wedge of toast….. I love mushrooms!

By the time you read this, the bounty will be gone, from this field at least, I’m sorry.  There will however, be plenty more, somewhere.  But make sure that before you pick and indulge, KNOW YOUR MUSHROOMS.

Many, even experts, have been sick and seriously ill having eaten poisonous mushrooms.  The Field Mushroom is fairly easy to spot, as is the Horse Mushroom, but don’t confuse them with the Yellow Stainer, which will give you a very unpleasant few hours, though thankfully you would recover.

Be very careful about picking immature mushrooms as the distinguishing marks may not have developed fully, making it possible to confuse varieties.  If you’re not experienced in foraging for mushrooms, or lack confidence in recognising the edible from the poisonous, buy yourself a good book, and go foraging with someone in the know. Please don’t take any risks.

This week’s recipe makes the most of this sudden abundance of the field mushrooms, but obviously you can buy some at the supermarket to make a lovely wholesome soup, perfect for these cooler, end of summer temperatures

All mushrooms are fungi, but not all fungi are mushrooms!  For those fungi that produce them, the mushroom plays a similar role to a flower or a fruit in plants.  Some part of each mature mushroom produces microscopic spores that are similar to pollen or seeds.  The rest of the fungal organism typically lives in the soil, wood, or some other material and is composed of thread-like strands known as mycelium.  The expanding growth of the mycelium often results in circles of mushrooms or “fairy rings”  An individual mycelium can grow very large, with at least one well-documented case covering more than 1,500 acres!

To serve, spoon the soup into deep, individual bowls, garnish with the chopped parsley and remaining mushrooms, and serve with crusty white bread.