How to make a raised bed!

During my first visit to St. Mary’s School I found a really great and enthusiastic crowd of teachers, eager to get a school vegetable garden up and running… they had plenty of space, plenty of willing children eager to get digging. Two weeks on, two areas of turf had been stripped and we were ready to get going!! 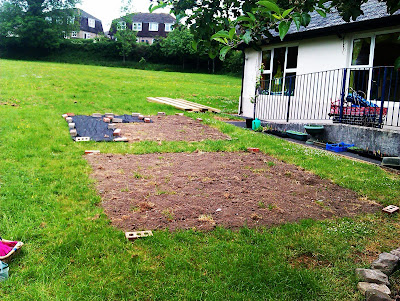 When I returned I brought with me…..
eight lengths of roof perlins and 40 bags for decent compost!

I discovered a few years back that the cheapest way to build a raised bed (of any significance) was to purchase two 20ft (6m) long perlins,
saw them in half and nail them together!
Voila.. a raised bed within an hour!! 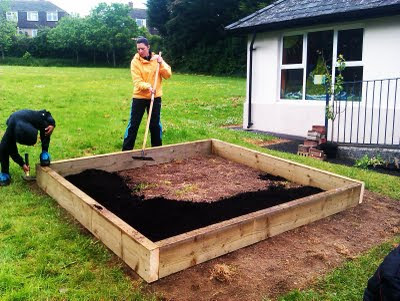 Then comes the heavy work! Several bags of compost later the garden begins to take shape! The heavens opened, we all got quite wet, but we soldiered on to complete the task and finally, within two hours we were planting… and sowing seed! Wow, all in a mornings work! 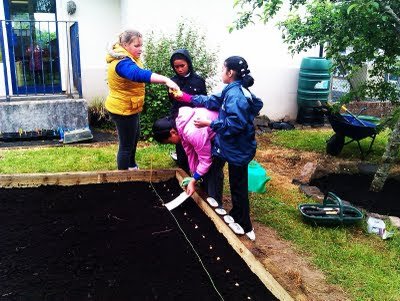 I’ll be back next week to plant some more, but in the meantime, the childen are going to plant an apple tree, plant some seed potatoes in old car tyres… it’s all action!!
where we are
cooking courses for everyone
improve your skills, your repetoire and have some fun with food at Y Sied